Facebook today revealed a new login feature that actually tells you info you’re volunteering. Considering how much info Facebook both keeps and distributes on its users, I can see this coming in handy for lots of users.

The new feature is called, appropriately, Login Notifications, and it sends you an in-app notification and email whenever you log or re-log into a third-party app using your Facebook credentials. The notification informs you clearly what information you’re sharing with the site you logged into, and offers a handy button to the settings menu if you want to remove access. It’s a small change, overall, but it may help many people get an accurate notion of just how much info they’re sharing. 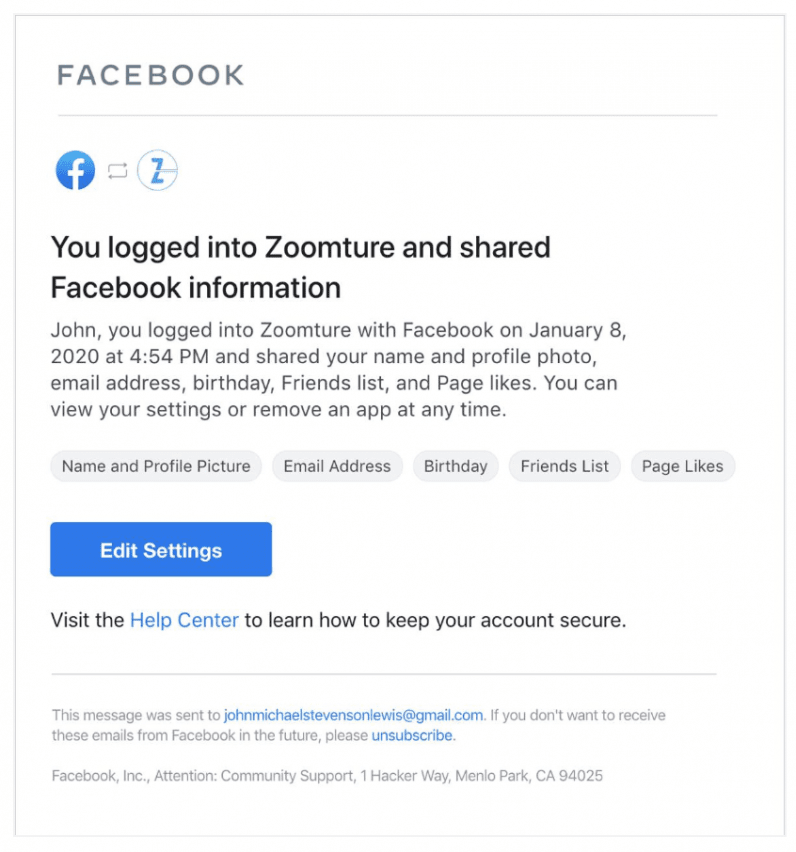 Up to now, it’s been almost seductively easy to log into something with Facebook — so many sites support it that it feels like you’re going out of your way to not use that option. But with ease comes potential danger: Facebook’s whole business model relies on being able to distribute and shift user data to its advertising partners. Every time you use Facebook to log into another site, you’re not only offering that site access to your data, but you’re adding yet more information to the pile Facebook already has on you.

And while I’m sure that’s obvious to many of you out there, some data suggests it’s not that obvious to lots of users. A Pew study from last October revealed that a large number of users aren’t aware of the fact that Facebook owns Instagram and WhatsApp. Another study from last January showed that three-quarters of respondents didn’t realize how much data Facebook accrued on them, and over half weren’t comfortable with it once they were informed.

Facebook’s made an effort in the last year or so to make everyone aware of what they can do to secure their own information on the site (short of deleting their accounts entirely), by promoting its Privacy Checkup tool for example. Puxuan Qi, the software engineer who revealed the new feature, said in the Facebook developer blog post: “We understand there are sensitivities to people’s information privacy and related information and are taking active steps to honor and improve this in our products.”

But even so, it’s still sometimes not clear just how dicey it is to use your Facebook login on other sites. Hopefully this addition will help users do so with their eyes open.