Income for middle-class Americans is growing more slowly than for both top earners and the poor, according to the Congressional Budget Office. The analysis comes two years after President Donald Trump enacted the Tax Cuts and Jobs Act, a major overhaul in the nation’s tax laws billed by the White House as a boon for the middle class.

After accounting for taxes and government benefits, the middle fifth of households will see their income grow by 6.6% through 2021, the CBO forecast — that compares with a 17% gain projected for America’s richest workers. In dollars and cents, the middle 20% of families will have seen their income grow a total of only $4,400, to $70,300, between 2016 and 2021, the agency estimated.

The analysis factors in the impact of taxes and of government “transfers,” which include benefit programs such as Medicaid and food stamps (but exclude social insurance programs like Social Security). 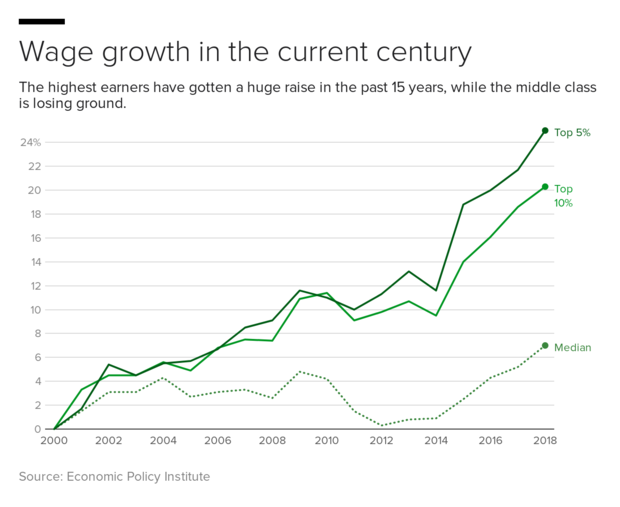 Thanks to the Tax Cuts and Jobs Act, top earners are also expected to get the biggest overall reduction in taxes over the five-year period studied by the CBO — their tax rate is projected to slide by 3 percentage points over the next two years, versus a dip of only 1 percentage point for the bottom 95% of earners, according to the CBO. The tax rate for households in the 96th to 99th percentiles is expected to fall by 2 percentage points.

The findings may fuel criticism that the lion’s share of the gains from the 2017 tax law has gone to the rich and to corporations. The analysis also calls into question whether the nation’s ongoing economic expansion — now in its 10th year — is significantly improving most Americans’ standard of living, analysts said.

“Significant improvements in the quality of life of the middle class are not likely to come from general economic growth, or at least not anytime soon,” wrote Brookings senior fellow Richard Reeves and research analyst Christopher Pulliam in a blog post assessing the CBO’s projections.

To be sure, the gap between rich and poor has been widening for decades in the U.S., with the CBO noting that the top 1% enjoyed much faster average income growth from 1979 to 2016 than other groups.

Interestingly, before taxes and transfers, income growth since 1979 for both the lowest-earning and top-earning Americans has outperformed the middle-class — a trend the CBO expects to continue. Over the next two years, income for the bottom 20% of earners is forecast to grow 6.3% and to jump 12% for those at the top. That compares with a projected 5.8% income gain for the middle 20%.

Why the middle class is losing ground

Several factors are widening the gulf between the middle class and the rich in the U.S., the CBO says. Most important, top earners are grabbing a larger share of the nation’s overall income, which could be due to “superstar” workers and top executives receiving huge pay packages, according to the non-partisan agency…Read more>>